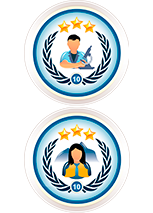 Appointment as an Honorary Fellow of the Ecohydraulics Committee of the IAHR society is to honor exceptional achievement and/or service within our community and profession.  This award may be given to a member or non-member of IAHR.